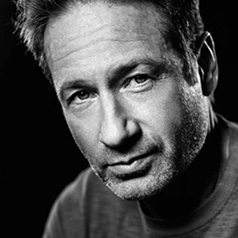 David Duchovny is an actor, writer, producer, director, and novelist best known for playing FBI Agent Fox Mulder on the hit television series ‘The X-Files’ and Hank Moody on ‘Californication’, both of which earned him Golden Globe awards.

He has spent the past five years learning about the energy and climate change landscape and is a strong believer that keeping all climate scale zero-carbon options on the table is essential to address climate change.